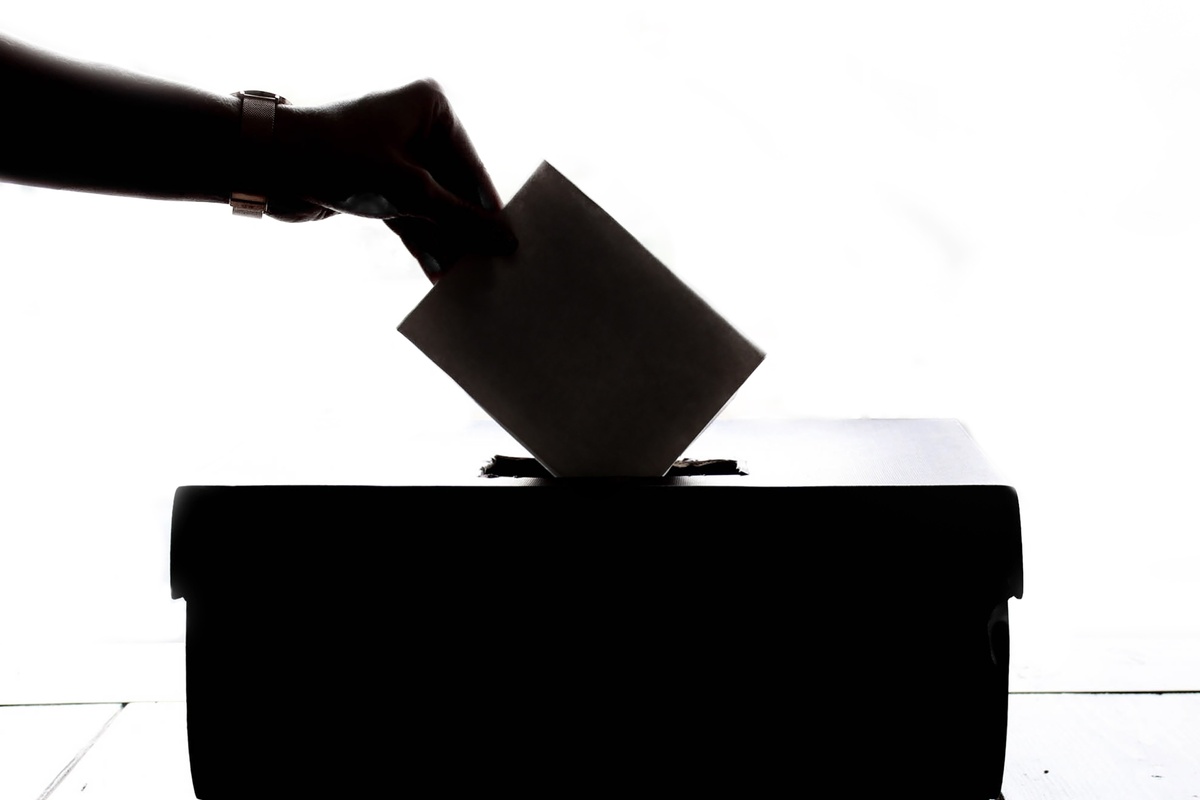 10 Things To Know About The Midterm Elections

The midterm elections have come and gone, and although the final results in many races are still being tabulated, it's uncertain whether the early results will influence the stock market. Interestingly, in 17 of the 19 midterms since 1946, markets performed better in the six months following an election than they did in the six months leading up to it.

Here are 10 things to know about the midterm elections, how much do you know?

1. The president’s party tends to lose House seats in midterm elections and 2. The equity market has been positive the year after midterms

The White House occupant’s party has tended to not perform well in midterm elections.
• The president’s political party, over the past six decades, has lost on average 23 seats in the US House
• In fact, the only presidents who led their party to gained seats in the House were Bill Clinton in 1998 and George W. Bush in 2002

The stock market has posted positive returns in the calendar year following midterms for more than six decades, regardless of the election outcome. 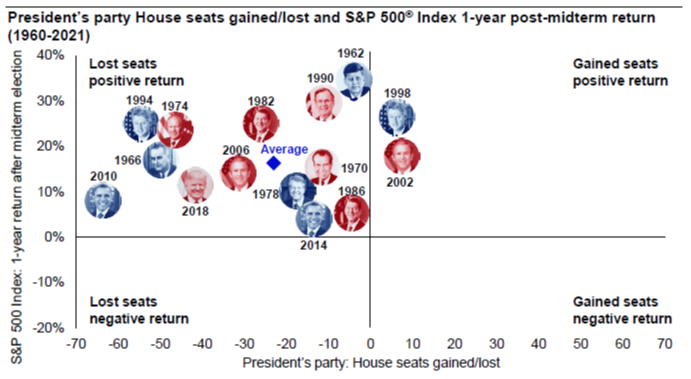 3. Low approval ratings have been a bad sign for the president’s party

The president’s approval rating in the quarter before the midterm election has often been a reasonable indicator of how his party will perform.
• President Biden’s average first-term approval rating potentially suggests that Democrats are poised to lose control of the House, meaning single party Democratic rule would end, and a new period of divided government period would begin.

4. Declining real income has tended to result in political change

Inflation, according to a June 2022 ABC News/IPSOS poll, is the top issue for voters ahead of midterms.
• 80% of Americans said that inflation is an extremely or a very important factor in how they vote

Periods of declining real income on a year-over-year basis have tended to result in Americans voting for change. 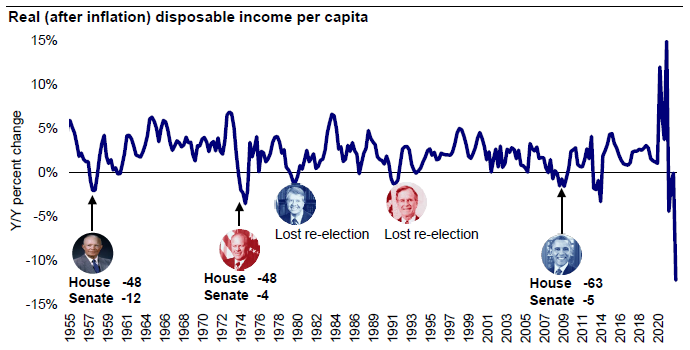 5. Markets have historically been volatile in year two of a presidential cycle, and performed strongest in year three —regardless of midterm outcomes

Markets have historically tended to perform the worst in the year ahead of midterms—2022 appears to be continuing that pattern. Year three of the presidential cycle, however, has historically posted strong average returns. Despite the talk of markets preferring divided government, market results in the year after midterms have tended to be strong regardless of the outcome.

The two most likely outcomes of the 2022 midterm election have historically proven quite good for markets:

An important caveat: The analysis could not be statistically significant. Returns, in most instances, tend to be driven by a handful of notable years:

Despite the focus on the midterms, monetary policy can often matter more and this adage holds true: Don’t fight the Fed. Presidents have historically been hurt or helped by monetary policy.

• Presidents Clinton and Obama (and for a period Bush II) benefitted from prolonged periods of benign inflation and easy monetary policy
• Strong market returns under President Obama occurred during single-party Democratic rule, as well as during a divided government

Many investors fear that a political party might radically re-engineer the economy. But consumption, business investment, and government spending have been remarkably consistent as a percentage of gross domestic product (GDP) across multiple iterations of government control. Economic activity, represented by the median annualized quarterly percent change in US GDP, has been remarkably similar during single party and divided government rule. 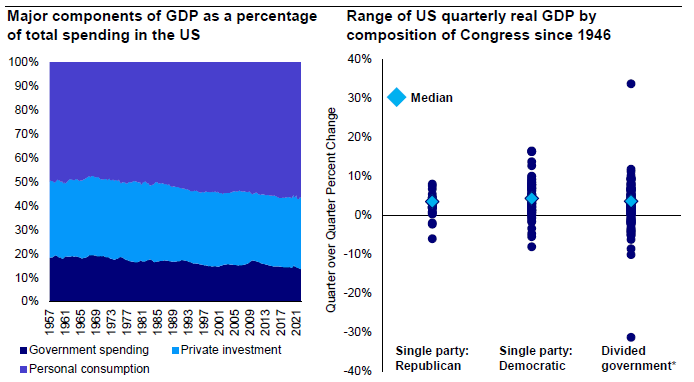 9. Investors have been better off staying fully invested

The best-performing portfolio over the past 120-plus years stayed fully invested throughout both Democratic and Republican administrations. Hypothetically, those who only invested during single-party rule by their preferred party or during divided government fared much worse. The more time investors spent participating in markets, and the less time they spent focusing on politics, the better.

10. The market’s long-term advance has occurred across multiple administrations and combinations of government

Don’t let election outcomes disrupt long-term investment plans —no matter who you favor. Markets tend to trade on whether the world is getting better or worse, relative to expectations, irrespective of who controlled the White House and Congress.

Source: Bloomberg and US Congress 12/31/21. The S&P 500®Index is a market-capitalization-weighted index of the 500 largest domestic US stocks. Indexes cannot be purchased directly by investors. Past performance does not guarantee future results.

Source: Bloomberg, Dow Jones, 12/31/21. The Dow Jones Industrial Average is a price-weighted average of 30 blue-chip stocks thatare generally the leaders in their industry. Indexes cannot be purchased directly by investors. Past performance does not guarantee future results.

Sources: Goldman Sachs, Bloomberg L.P., 6/30/22. The Goldman Sachs US Financial Conditions Index is a weighted average of riskless interest rates, the exchange rate, equity valuations, and credit spreads, with weights that correspond to the direct impact of each variable on US Gross Domestic Product. The S&P 500®Index is a market-capitalization-weighted index of the 500 largest domestic US stocks. An investment cannot be made in an index. Past performance does not guarantee future results.

Source: US Bureau of Economic Analysis, 6/30/22. Gross Domestic Product (GDP) is the total value of goods and services produced in a year. *The outlier GDP growth quarters under divided government were the result of the shutdown and reopening of many segments of the US economy as a result of the COVID-19 pandemic.
8

Sources: Bloomberg, Invesco, 6/30/22. For illustrative purposes only. The S&P 500®Index is a market-capitalization-weighted index of the 500 largest domestic US stocks. An investment cannot be made in an index. Past performance does not guarantee future results.

Source: Bloomberg, Dow Jones, 6/30/22. The Dow Jones Industrial Average is a price-weighted average of 30 blue-chip stocks that are generally the leaders in their industry. Indexes cannot be purchased directly by investors. Past performance does not guarantee future results.